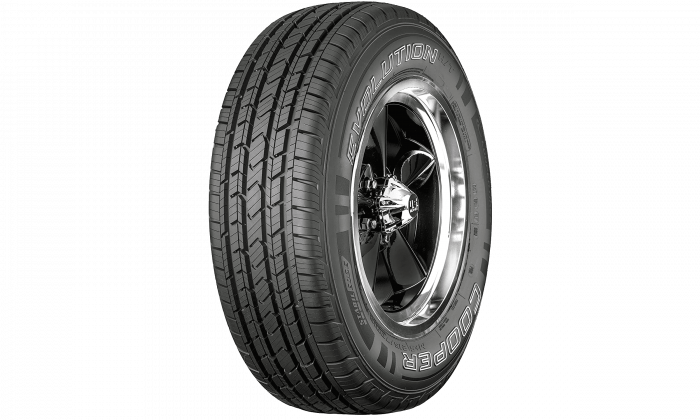 Evolution is a relatively new addition. Cooper has only released this tread 4 years ago, so you bet it’s technologically advanced. All Cooper’s all-season tires are rather costly, but this one is the cheaper variant. Because of it, people tend to expect less of Evolution, and that’s not entirely fair.
Cooper still put a lot into this one, technologically. And don’t expect them to be economical – they are as expensive as other Cooper tires, even if they are more affordable by contrast. E
So, let’s see what they got, precisely. 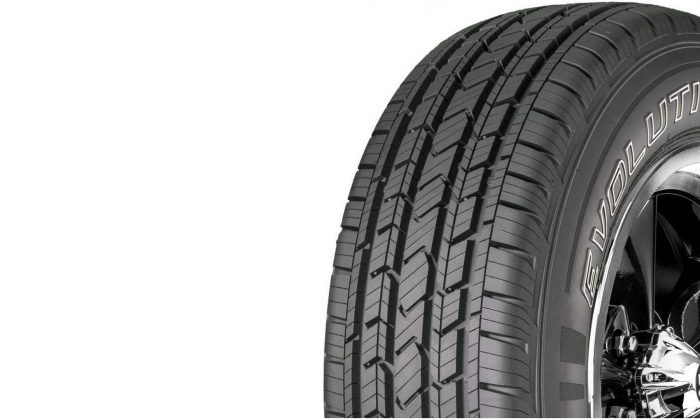 The design is pretty standard, as far as Cooper treads go. The rubber is the usual double-ply polyester with high percentage of silica components (especially inside the tread).
This entire thing is held together by two extra-strong metal belts located inside the rubber body. They are also covered in two layers of nylon, which serve as another reinforcing agent. Thanks to them, the entire structure is far more durable, strong and unyielding. This increases the tread life and damage resistance. 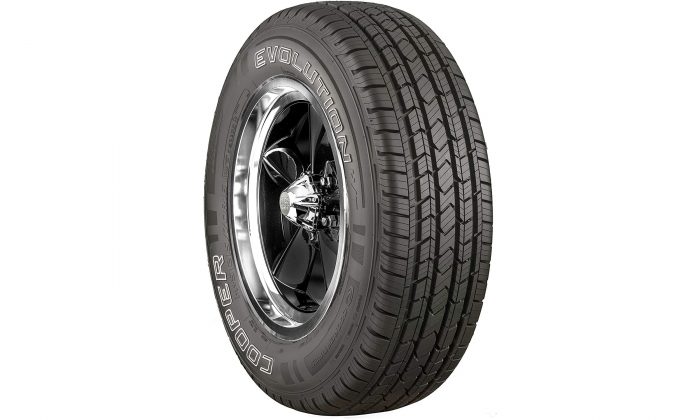 The design, as you’ll see further, is aimed at increasing the longevity and strength of these tires, as well as introducing more stability and better handling. The grip is rather secondary, but they generally don’t disappoint in this department, either.
It all bore fruit, because the minimal mileage on these is around 100,000-120,000 km (or 4-5 years of driving in all seasons). It is a good result for an all-season tire – especially since all the costlier and more innovative all-season Coopers have pretty much the same mileage as these. 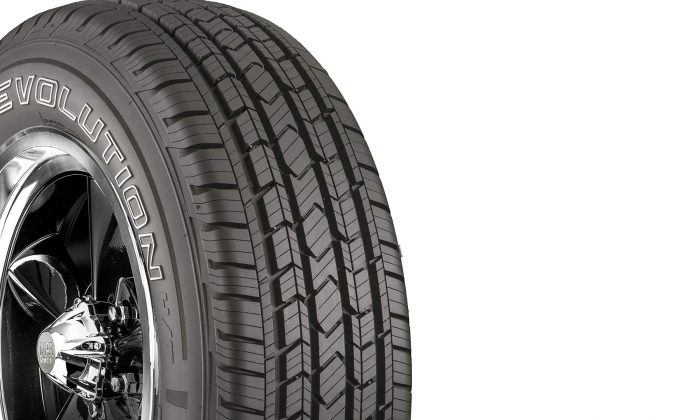 These treads weren’t developed for great performance (although they are decent enough), so there aren’t too many innovative solutions introduced here. The technologies are pretty basic.
The tread pattern is mostly symmetrical, contrary to what most people are used to seeing on Cooper tires. The symmetry is there to promote stability, steering and clean tread wear. In short, they are all about comfort and safety.
This principle is in accordance with their StabilEdge technology. In accordance to it, each rib is given a similar angular pattern. It’s not terribly aggressive, but the positioning helps improve handling without sacrificing stability and comfort. That’s partly why the tread is so good on dry surfaces.
On slippery surfaces, Evolution behaves worse. Cooper did introduce several solutions to improve handling in rain and even snow. They did a decent enough job, but you can still feel that they could do better. 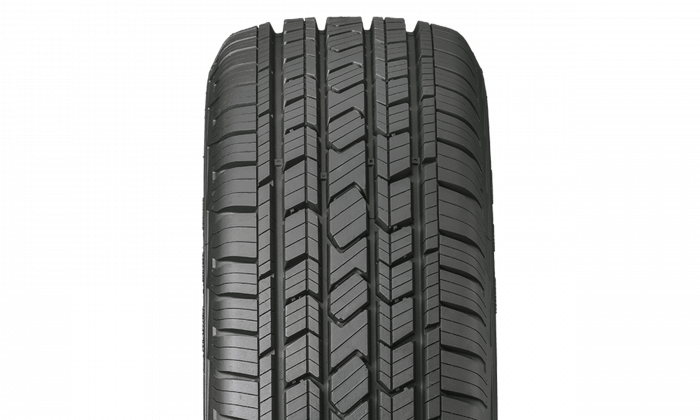 The wet traction is mostly ensured by the four peripheral grooves. They are rather wide, which could deteriorate grip in precarious situations, given there’s a lot less contact area now. Still, they evacuate water fairly efficiently even in harsh rains. And to improve grip in this weather, they introduced tons of 3D sipes all over the tread.
It isn’t perfect – these features aren’t enough to provide an outstanding and versatile grip. Sipes compensate for the lack of biting edges somewhat, but Evolution’s focus on handling rather than grip really shows. 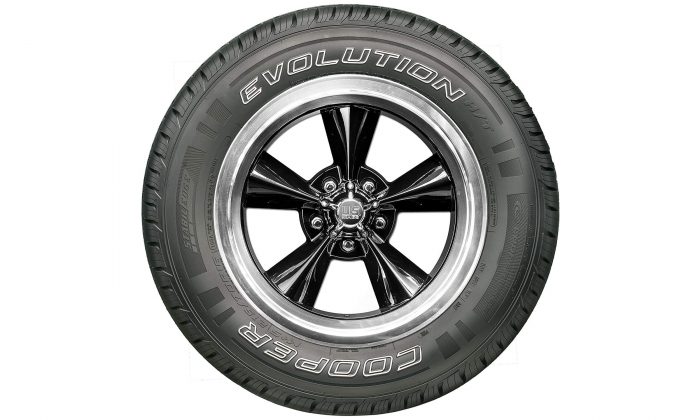 That’s partly why the tires aren’t good at all on snow, slush and especially ice. They are all-season tires formally, but you shouldn’t chance driving through thick snow with them. They are much worse suited for winter conditions than other Coopers of this category, like Discoverer.
The handling is good, and you won’t ever feel awkward trying to steer in these treads. But the grip could be much better. They only provide a truly great grip in dry tarmac, which is a shame. 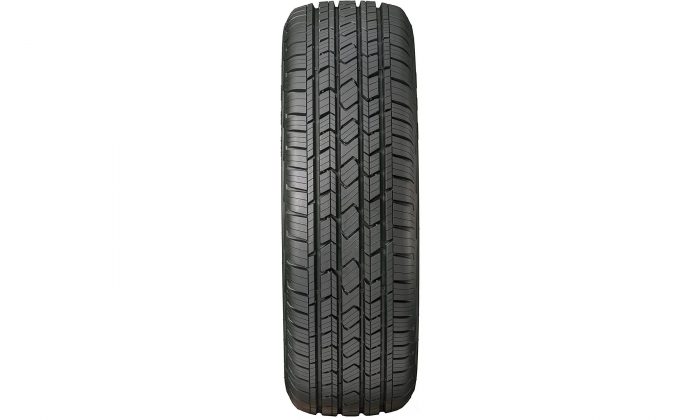 As you remember, Evolution is all about stability and comfort. And they really do provide it all – it’s not just a promotional chatter.
You might’ve guessed already that these tires handle very well and drive very smoothly wherever you are, but what about noise? Well, the tread design wasn’t just developed this way to increase steadiness, but also to reduce noise. Moreover, the tread stays equally quiet no matter how many inches you got left on them.
In this, they don’t disappoint at all. They are truly amongst the most comfortable Cooper tires yet. 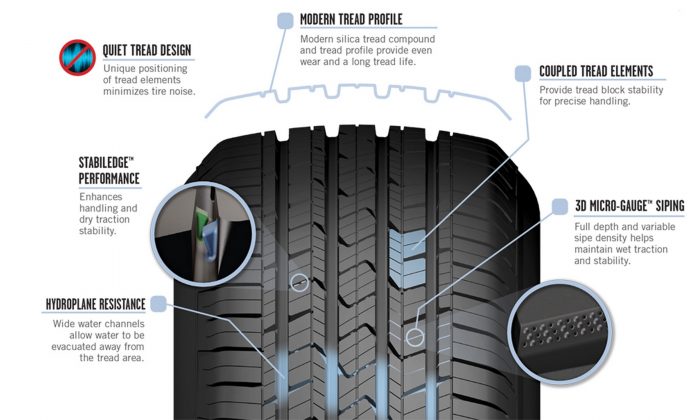 The main problem with Cooper Evolution H/T is its grip. They can’t go off-road, on deep snow and if the road is particularly slippery. They just give up if the situation is that bad. You also might consider not going over rubble and other pointy objects. Even if they are pretty tough, they are pretty flimsy when it comes to unconventional road condition.
The good advice would be to only buy these tires if there won’t be any harsh weather in your region the next 4-5 years. In this situation, the tires will perform marvelously. In worse, they will get you through, but you need to be careful and leave recklessness at home.
Overall, they are pretty good if you like comfort, good handling and steady driving without excesses.