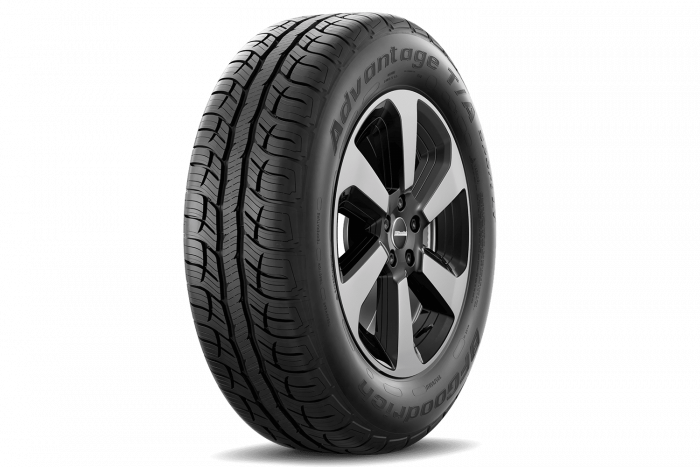 Advantage T/A tires are amongst the common all-season exemplars manufactured by guys from BFGoodrich. They usually make pretty good treads, and this one is no exception. Advantage is rather cheaper than usual all-season tires, but the quality isn’t really worse.
You should remember, however, that all-seasonal treads aren’t necessarily good all year round. Advantage tires in particular have some grip problems under specific weather conditions, but they aren’t too significant.
So, let’s see what these tires really are.

How are they made? 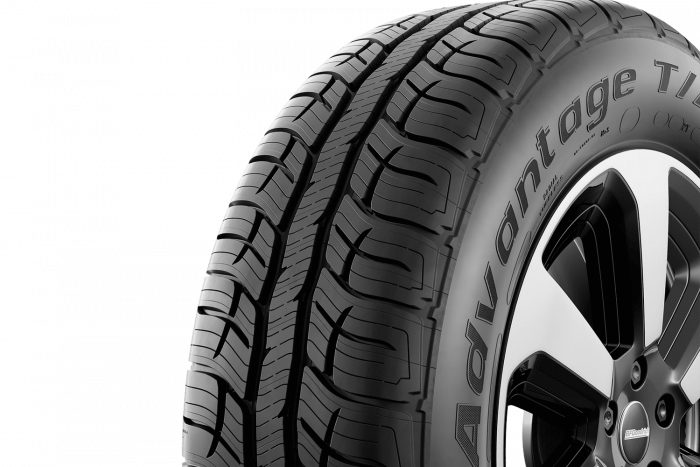 BFGoodrich utilized a lot of their standard technologies and methods while making Advantage T/A. If you’ve researched their other tires, you’ll see similarities. That said, there are also other additions designed to increase stability, steering, grip and so forth.
As expected, the body is made from double-ply polyester with a lot of silica inside (especially in tread area). Inside, the tire is supported by two steel belts for endurance and integrity wrapped in nylon. All that makes for a very durable tire product, but the tread is the essential part, as always.
A lot of components are further strengthened by their Equal Tension Containment System. This technology affects the composition in a very beneficial way: it improves stability, strength and handling – essentially giving the tires more integrity. 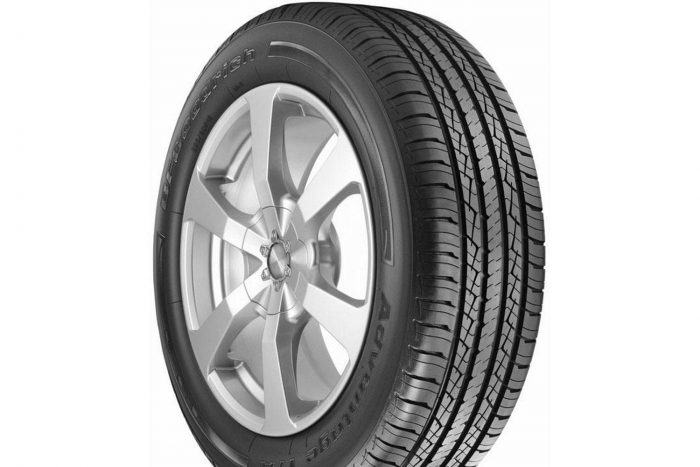 As a result, the expected mileage on these is about 100,000 to 120,000 km. It’s an incredibly good result. The difference is there because bigger tires obviously last longer. Considering these will be worn throughout the year, they’ll last for about 6 years (or so BFG projects).
And when the treads are close to thinning out completely, you’ll be able to see the so-called wear indicators along the big circumferential grooves. They are small bands visible clearly only when the tread is almost gone. 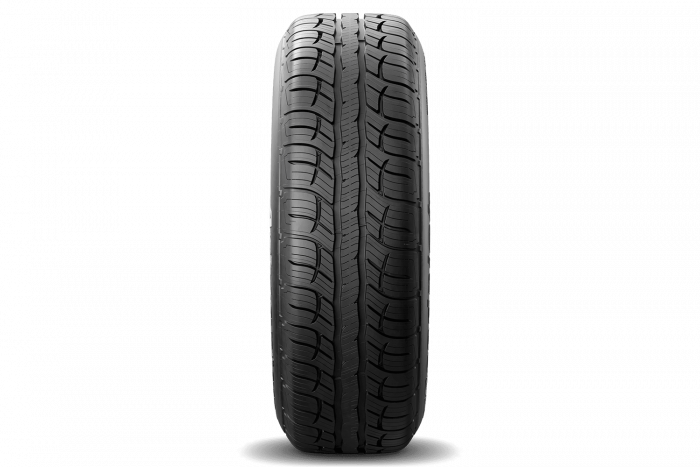 This tread is supposed to endure at least the usual weather conditions from summer to winter without losing too much handling and traction. To do it, they’ve been given a lot of handling-increasing solutions.
To start off, the pattern is fairly well-balanced. It’s symmetrical and not aggressive. Thanks to that, you’ll be able to enjoy a stable ride with decent grip in many various situations.
The contact area is very efficient, despite three huge peripheral grooves. The central rib (section) has a simple regular pattern that improves traction and steering significantly. The secondary ribs on both sides have a sharper pattern, which increases the bite – essential in snowy and rainy weather.
Finally – the shoulders. They do have the wide contact area with regular horizontal grooves, although their main purpose is to provide stability on the road and better steering around corners. That said, they are pretty rigid precisely for this reason.
And they didn’t forget about the sidewalls. They are considered a soft spot for most tires. On Advantage T/A tires, they are granted a G-Wedge technology that reinforces the sidewall structure from the inside. This innovation improves resistance and consistency, the factor that benefits steering very much. 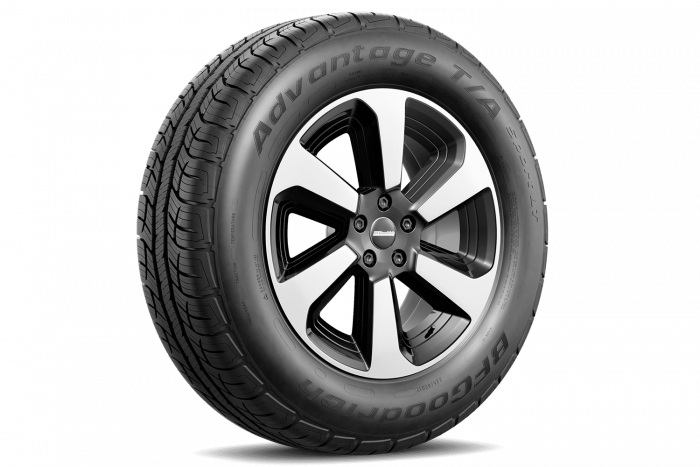 To further improve grip in wet weather, BFG introduced adaptive sipes linked all over the tread. They bite into the wet tarmac and this collective effort improves traction. They are also good at evacuating water, but this job is mostly done by peripheral grooves. The pattern isn’t designed to help get rid of water, so there’s still some hydroplaning.
So, there are many solutions for dry and wet traction, but what about snow? The silica composition naturally improves the handling on such treacherous surfaces. It’s good on snow, ice and even on rubble – all because silica is flexible and adaptive without sacrificing strength. 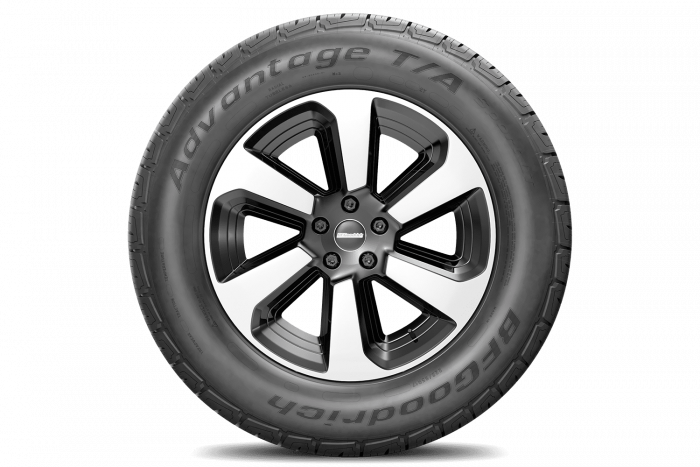 Advantage T/A is driven very well on all sort of surfaces. These tires aren’t bulky, and the ride is generally smooth (owing to the composition). After all, steering and stability are two aspects that were cherished the most here. That said, they may be quite noisy – especially in their later days.
When the upper layers of tread thin out, the tires become louder. They aren’t too loud, and you likely won’t notice it. The factor depends on the type of car you’re driving, but the present level of noise is, in general, more of an imperfection than nuisance. 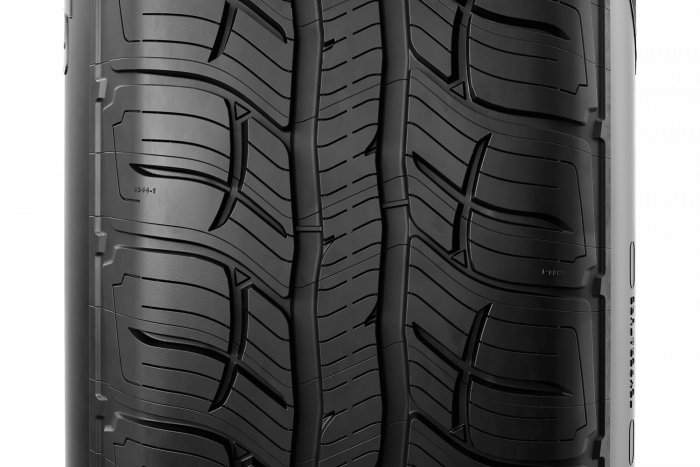 BFGoodrich Advantage T/A tires are definitely worth checking out. However, from the handling point of view there are definitely better all-season tires even within BFG’s own assortment. These aren’t bad, but they were designed for comfortable and responsive steering, and they kind of neglected the grip.
The grip is fine – actually, it’s better than what most all-season tires can offer. But if you expect that extra grip will be helpful, you’ll need something more aggressive, like BFG g-Force Sport Comp-2.