In the new test of the European automobile edition, the Motor expert group of the magazine examined the behavior of tires size 215/65 R17, created for the gaining popularity crossovers and SUVs. The tests showed which tires behave better in winter conditions, as well as on wet and dry asphalt roads. 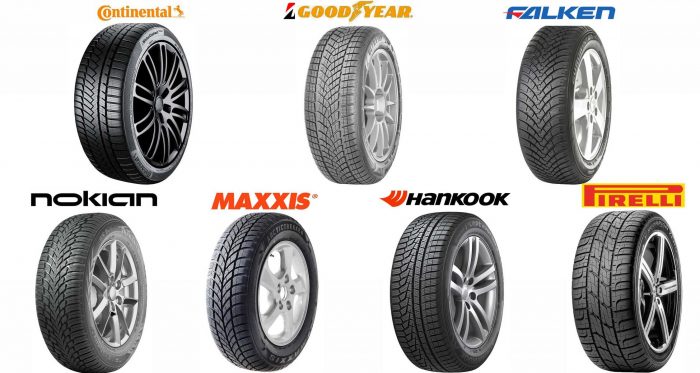 Today the market has a fairly large selection of rubber in the size of 215/65 R17 because these tires are suitable for equipping such popular cars as Audi Q3, Citroën C5 Aircross, Jeep Renegade, Opel Grandland X, Škoda Kodiaq, and Volkswagen Tiguan.

The first stage of the test, snow, and ice, took place above the Arctic Circle, in Finland. Tracks were specially prepared so that the coefficient of traction was the same throughout the surface. Testing on ice was conducted on a frozen lake near the track.

The second phase of testing took place in spring at a test center in southern Finland. There, the tires were tested on dry and wet asphalt at an ambient temperature of 5-6°C. Each tire’s rolling resistance coefficient was determined on a tire treadmill in the lab.

As a test vehicle, the experts chose a compact crossover VW Tiguan. 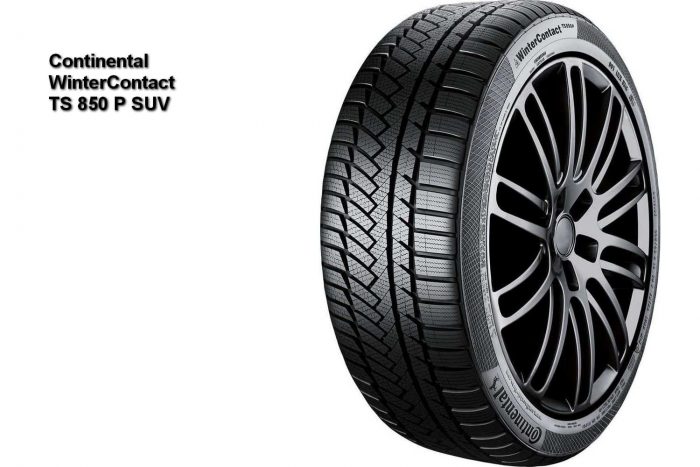 After summing up the results of all the tests, it turned out that the favorites did not disappoint – Goodyear, Nokian, and Continental confirmed the top level. These brands proved to be well-balanced and safe. But there were some surprises. One of the most expensive tire models in these comparative tests – Pirelli Scorpion Winter closed the final protocol with the worst result. On the other hand, the cheapest tire – Falken Eurowinter HS01 SUV took the honorable fourth place. Certainly, its results are inferior to the best competitors, however, the Japanese tire provides a very decent and stable level of safety on all types of surfaces. The performance of Maxxis confirms the effectiveness of the investment of this manufacturer in technological development. The budget tire of the Taiwanese brand managed to leave behind the representative of Hankook, belonging to the middle-price segment, and the representative of premium-class from Pirelli. 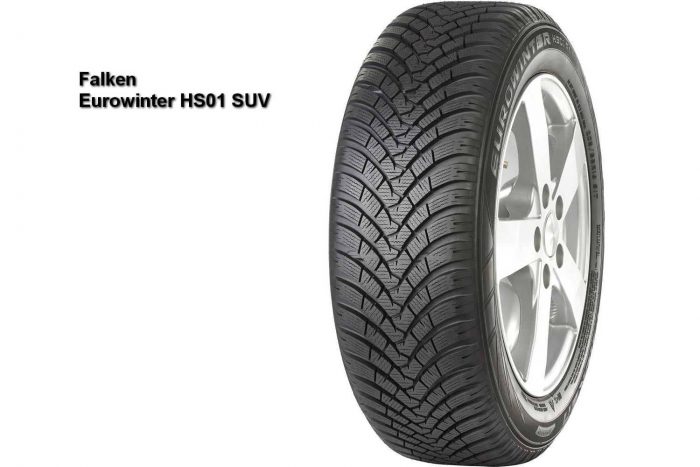 We must admit that all winter tires, which participated in these tests, passed the safety test. Even those models, which ended up at the end of the final table, cannot be called dangerous. However, spending a considerable sum of money on tires, it is worth choosing the best ones. 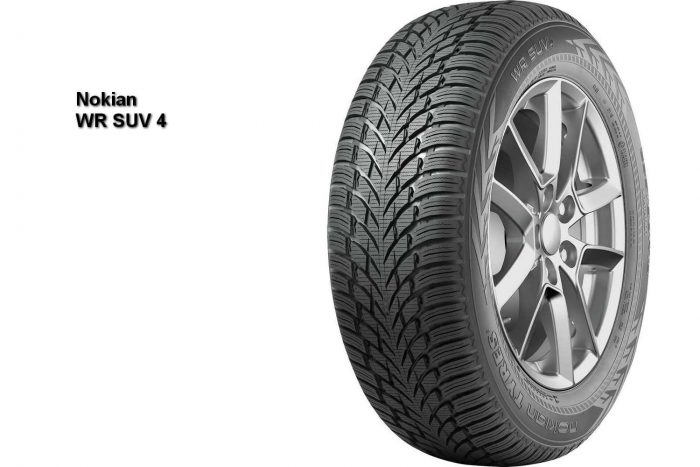 And now, let get to the results of testing the models in each category.

Test on the snow and ice 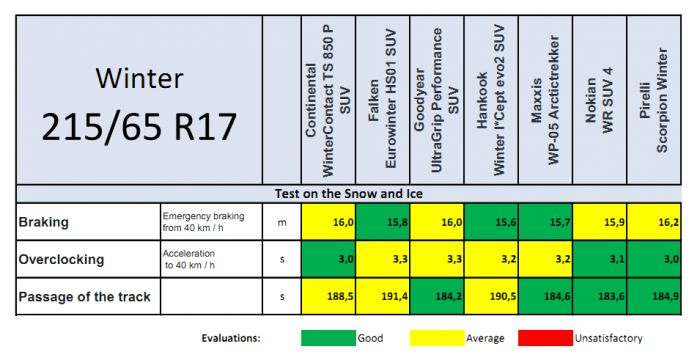 The tests on braking on snow at 40km/h were made on a thoroughly prepared track, covered with crumbled snow. Acceleration tests from 0 to 40 km/h are conducted with the ASR traction control system engaged. Time race in the snow was held on a track length of 2 620 meters. During the race, the test driver evaluated, among other things, grip, traction, braking, and handling. The ice race was held on a 1,000-meter flat course set on a frozen lake. Before each race, the ice surface was cleaned by a special machine. 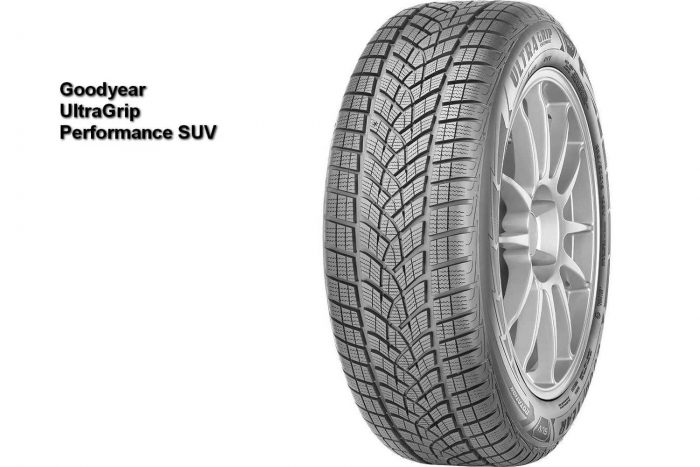 It turned out that the best braking characteristics on snow and ice are those of the most budget-friendly tires. The Hankook model took first place in the category, leaving the famous Pirelli and Goodyear envious at the bottom of the table. As for acceleration, Pirelli was ahead of all but Continental. These two premium models shared the first line. Nokian was the fastest on the track, but the leaders in braking – Hankook proved to be the worst. This model was left behind only by the even more unsuccessful Falken. 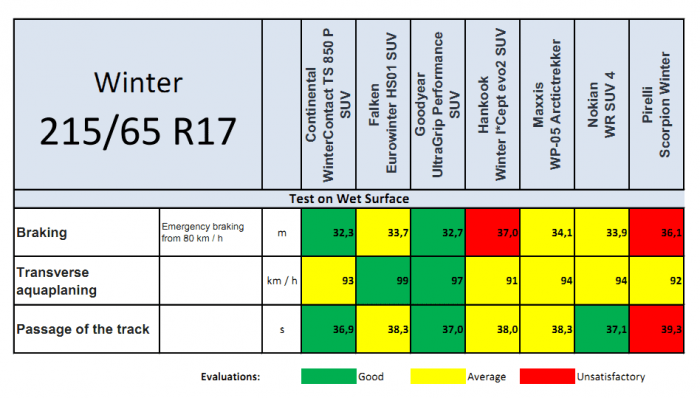 Braking distance from 80 km/h was measured on a road covered with a 1 mm thick layer of water at an ambient temperature of about 5°C. Longitudinal aquaplaning tests measured the maximum speed at which the car lost contact with the road surface in a puddle 9mm deep. Cross-traffic aquaplaning tests measured the highest possible cornering speed in 10mm of standing water. The time race on wet asphalt was held on a 700-meter track. In addition to timing, the driver evaluated various tire characteristics, such as grip or cornering stability. 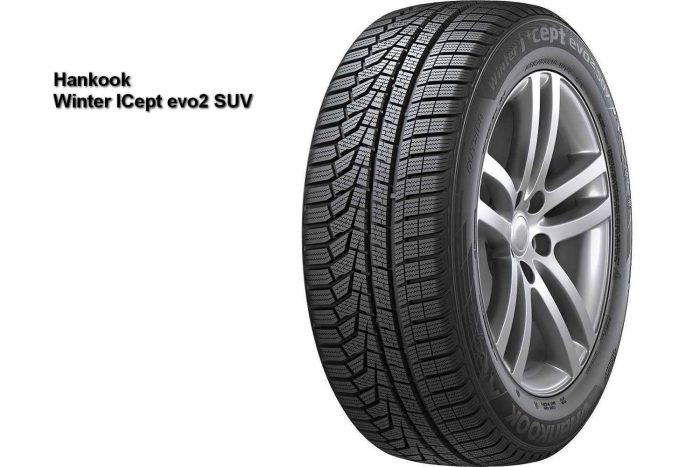 In the wet braking test, Continental tires won by a wide margin. Goodyear took the next place. But another world-famous brand, Pirelli, was at the very bottom of the standings, ahead only of Hankook. Falken and Goodyear turned out to be the most stable in cross-country aquaplaning, but Continental came out on top again. Goodyear and Nokian lost the lead, while Pirelli was again among the worst, along with Falken and Maxxis. 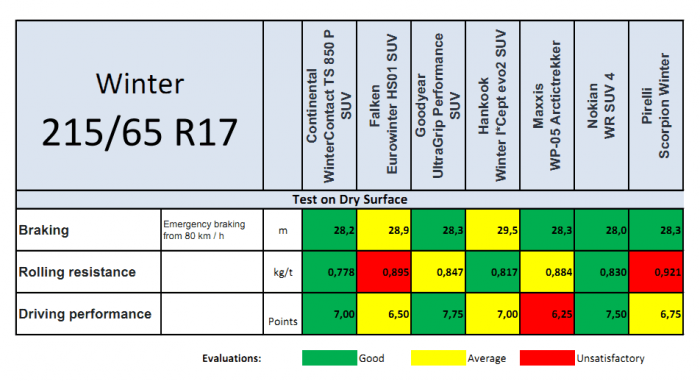 The braking tests measured the distance required to stop the car from a speed of 80 km/h. The driving characteristics were determined when driving on the highway at a temperature of around 6°C. Among other things, the car’s cornering stability and grip control were evaluated. Tire noise was measured while the car was driven with the engine off at 80 km/h. The rolling resistance level was determined on a special drum test rig in the lab. The coefficient shows the energy loss as the tire rolls on the asphalt, which ultimately affects fuel consumption. 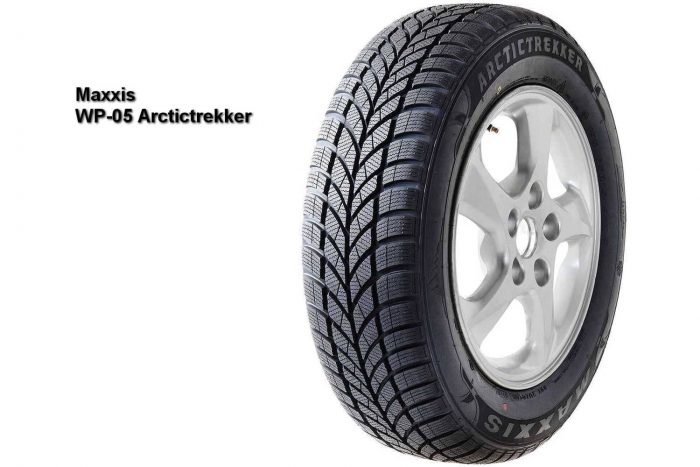 In the dry braking test, the Finnish Nokian won, surpassing Continental and Goodyear who took 2nd and 3rd place respectively. In terms of rolling resistance, Continental and Hankook have the best friction properties, far surpassing the test outsiders, Pirelli tires. In terms of driving performance, the leaders were Goodyear tires, which proved to be the most athletic. Three more models, Nokian, Continental, and Hankook, performed very well, but the outsiders were Falken and Maxxis, leaving a place in the middle of the table for the unlucky Pirelli. 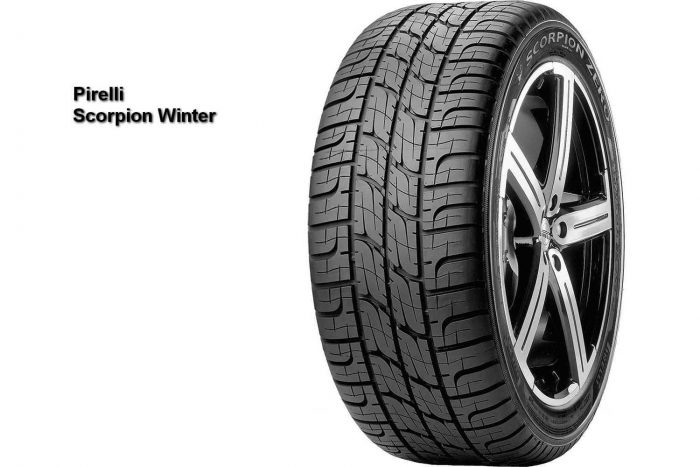 The first three places were taken by Goodyear, Nokian, and Continental, very similar tires that offer the highest level of safety. The difference between the winner Goodyear and the third-place Continental is less than two points. The cheapest tire in the test, Falken, took fourth place with a very respectable result. The rest of the participants were not impressed with their characteristics, but provide the necessary level of safety. In the last place in the test was a model from the legendary Italian brand Pirelli.