The tire test that we are going to talk about today was conducted by the experts of the largest European car magazine Promobil. The magazine tested seven all-season tire models in the size of 225/70 R15C. In our opinion, the results of this test are very important for car owners around the world, because, with the inconsistent weather in recent years, it is much more beneficial to find the perfect all-season tire than to constantly switch from winter tires to summer.

All-season tires are becoming increasingly popular. And last year, their share of sales in the global market almost reached 20 percent, which is very impressive. However, professional motorists working on snowy, icy, and wet cold roads still prefer winter tires, whose share of the European replacement tire market is about 50 percent. At the same time, the share of summer tires in the aftermarket has dropped to 32 percent.

One reason for the trend toward all-season tires is climate change, which is becoming increasingly visible. In addition, component and vehicle maintenance costs are increasing significantly.

Previous tests have shown that all-season tires cannot match the performance and traction levels on snow and ice of the latest winter tire models. All-season tires also have disadvantages when compared to summer tires, especially on hot summer asphalt. Because their compound is softer than summer tires, they are not as reliable, which is evident in the longer braking distance and lower cornering stability. They also wear out faster, all of which suggests that all-season tires are a compromise after all.

But this “compromise” also has its advantages. For example, in summer, the more aggressive, deeper, and more embossed tread of all-season tires, with more cross grooves and lamelled blocks, provides much better traction on loose or slippery surfaces when you need to get to a rain-soaked campsite in a heavy front-wheel-drive camper. Also, all-season tires are generally better protected against dangerous aquaplaning.

So, in tests of all-season tires for campers of size 225/70 R15C, conducted by experts of German magazine Promobil, seven models were tested.

Test on the snow 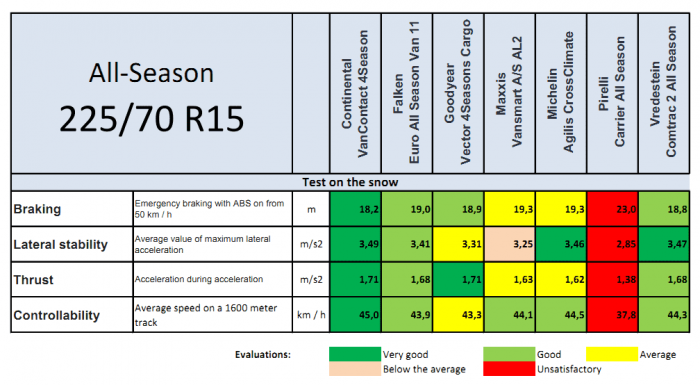 Tire tests on snow took place in the mountains of Swiss Nufenenen, where all climatic and geological features ensure a constant temperature of -7C.

So, the Continental VanContact 4Season tires proved to be the best in this category, proving to be the best model for the Kemers thanks to their excellent results in all snow disciplines. This model left all competitors far behind on snow. 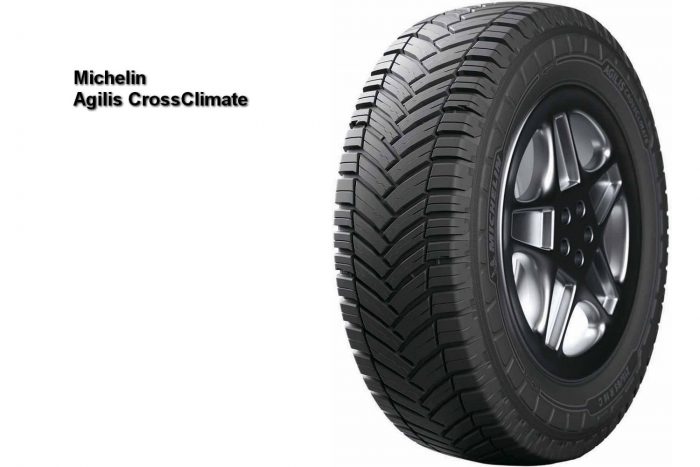 Second place went to the Vredestein tires, with equally good cornering safety, but with some compromise in braking and traction. Also very convincing in the snow tests was the Falken with its slightly lower grip and balanced driving behavior. It was followed by Goodyear and Michelin with less reliable cornering grip, while Maxxis with its ribbed tread design failed to score points due to sliding in curves due to insufficient lateral grip.

As for the category outsiders, the Pirelli Carrier All Season failed in these tests. Despite the presence of the snowflake symbol on the sidewall, the Italian all-season tire does not have the necessary grip for safety in snowy conditions and, according to Promobil experts, is categorically unsuitable for use in winter conditions. 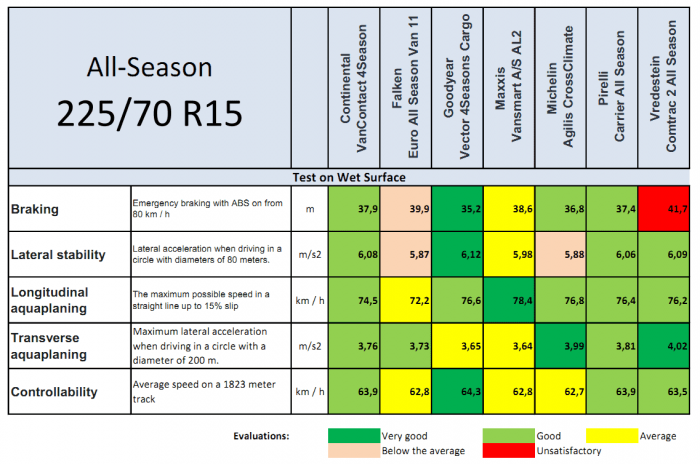 The testing of the seven sets of tires in this category took place already in Germany, at a temperature of +2C. For the most difficult and important category of the test, the tracks were carefully prepared and equipped with auto irrigation.

So, let’s see how the participants showed themselves here. In the behavior on wet roads, Continental tires showed themselves very well, but could not become the best, because of the winter-optimized rubber mixture. The braking distance of 38 meters on the wet at 80km/h is good, but not great. 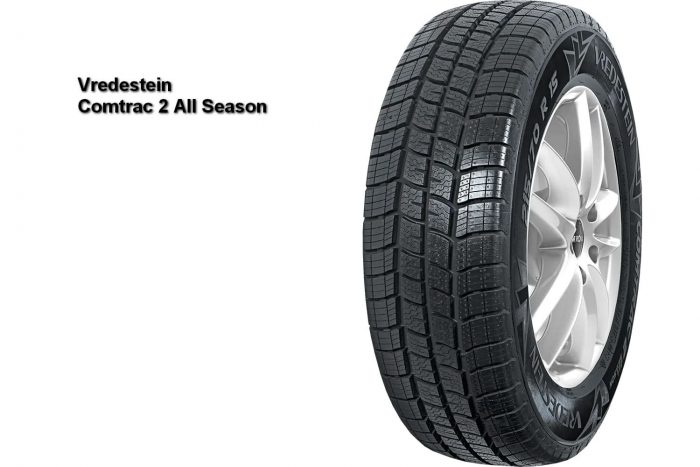 So who was the leader in the wet? Pirelli and Michelin have the best braking properties, while Goodyear is out of competition in this discipline, stopping about three meters earlier. Maxxis and Falken are noticeably weaker than Continental, and Vredestein fails on wet braking and slides about 42 meters.

But confident braking is not all that matters in the wet. By no means should aquaplaning resistance be ignored, which is tested on constantly watered test tracks – both on curves and when driving in a straight line. In particular, in these tests, to measure aquaplaning in curves, the test car was accelerated gradually, round after round, on a circular track 200 meters in diameter with an artificial puddle 20 meters long and 7 mm deep. 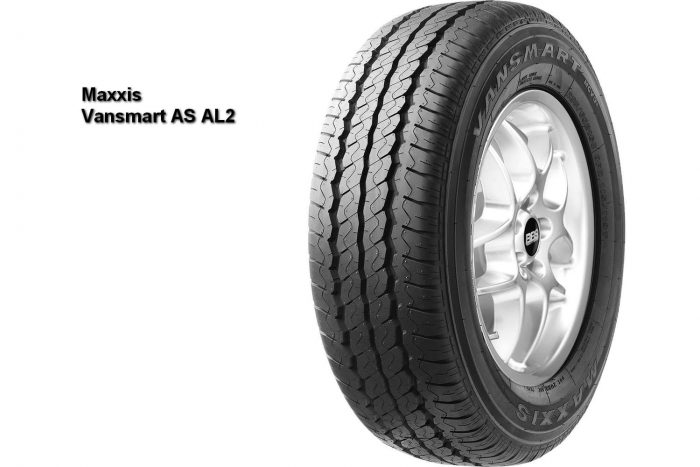 In this simulated situation of heavy rain, cars with wide summer tires often lose traction at speeds as low as 60 km/h and begin to slide. On the contrary, heavy Fiat Ducato on all-season tires with a deep tread pattern at such speed is still cutting water streams, and only at 80 km/h, the tires of the van start to float. The task of the test driver is to determine the safety margins of each tire in the marginal zone.

As a result of these tests, Michelin and Vredestein tires are qualified as especially safe even in heavy rain. Conti, Goodyear, Maxxis, and Pirelli are also good, and only Falken slides noticeably earlier than others in the longitudinal aquaplaning test.

A handling test on a uniformly dampened winding circuit, which the test driver tries to drive as fast as possible, clearly shows whether all objectively measured tire characteristics, such as braking distance, longitudinal and lateral traction levels, and aquaplaning resistance, work together to provide performance and safety in real-world road conditions. 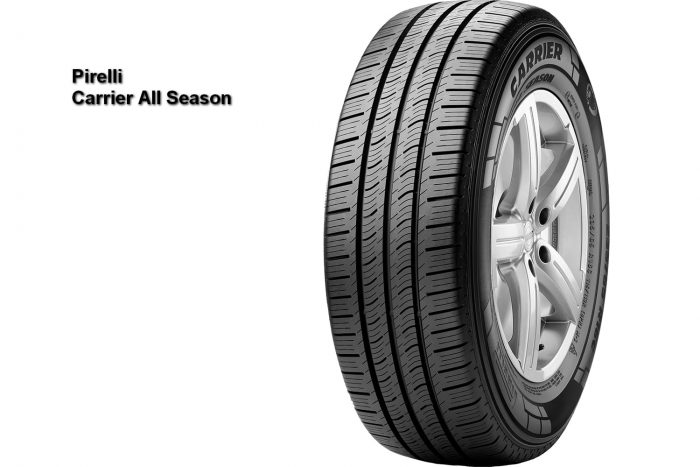 The average speed of a fast lap gives you an initial indication of the tire’s traction and safety margin. In addition, while driving, the driver also pays attention to how the tires affect the vehicle’s behavior. An RV and motorhome tire should always be reliable, forgiving of small steering errors, and generally prone to understeer, thus contributing to the camper’s calm demeanor. Passing a fast lap, during which the driver has to steer constantly or, on the contrary, unexpectedly face the excessive reaction of tires to steering turns, leads to the obligatory removal of points in subjective evaluation of tire behavior.

So, which tire was still the best on wet roads? Certainly, the Goodyear Vector 4Seasons Cargo, which convinces with safe, balanced behavior and the shortest braking distance. Almost at the same high level, but with concessions in one discipline or another, Pirelli, Conti, and Michelin follow the leader. Maxxis and Falken also achieved acceptable results, and only Vredestein’s Comtrac 2 All Season spoiled its generally quite convincing wet asphalt performance with a very long braking distance. 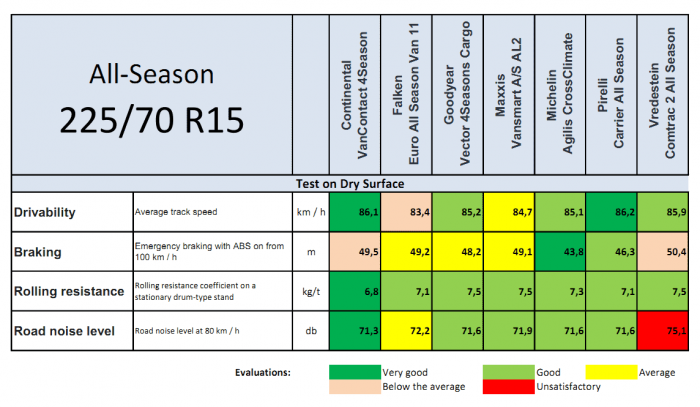 What interesting results will tell us on the dry road? Nothing particularly surprising. The models with reliable braking and short braking distances score the most points. Therefore, the lead went to the more summer-oriented, Michelin Agilis CrossClimate tires. The braking distance on dry asphalt of 43.8 meters at 100 km/h is a full two and a half meters shorter than that of the runner-up Pirelli. Falken, Goodyear, and Maxxis need two or three meters more to stop the Ducato at 100 km/h, and Continental and Vredestein – even three or four meters. These are critical indicators, which in case of emergency may cause serious car damage, and that is why they are punished by the Promobil experts with considerable loss of points. 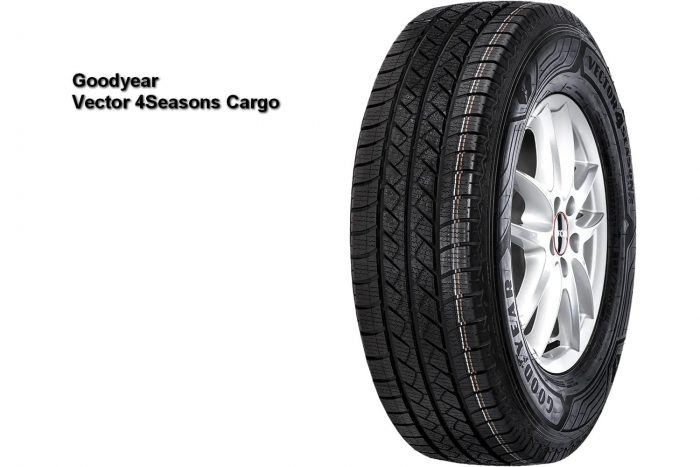 Even though motor homes and caravans in practice usually move slowly and carefully, it is not at all impossible that they may need a sharp evasive maneuver from a suddenly appeared obstacle. When changing lanes quickly, the driver has to be 100 percent confident in the safety of the maneuver and the stability of the vehicle. And this, in turn, is largely determined by tire design and construction.

During the track test, a daring, but always controlled, lane-change maneuver at 120 km/h was simulated, and experts assessed how the car behaved: how quickly did it respond to steering commands, was the rear axle under control, or was it lost? 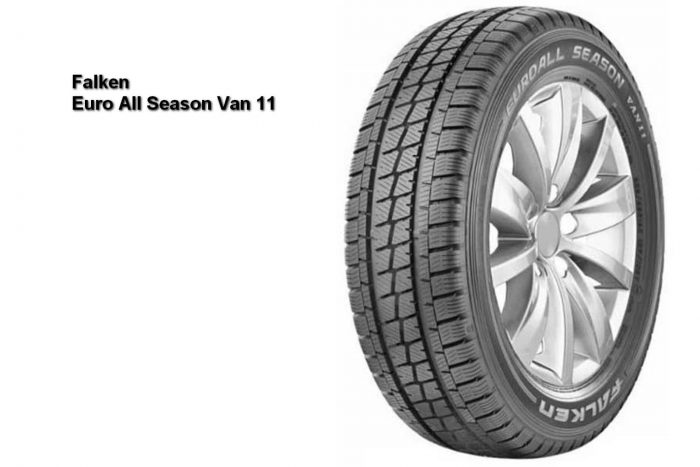 And finally, the test of drivability on dry asphalt. Similar to the wet test, this one evaluates tire performance and driving safety on a twisty, circular track. Due to the somewhat limited technical capabilities of the test Ducato, lap times on different tires turned out to be relatively close. Nevertheless, according to the subjective assessment of the test drivers, there were clear differences between the tires.

As a result, Michelin was recognized as the safest all-season tire on dry roads with a short braking distance and impeccable handling. Pirelli and Continental are slightly better in corners, but weaker in braking. Goodyear on dry asphalt is also very close to them, while Maxxis and Falken, having quite acceptable driving qualities, cannot keep up with the leaders. 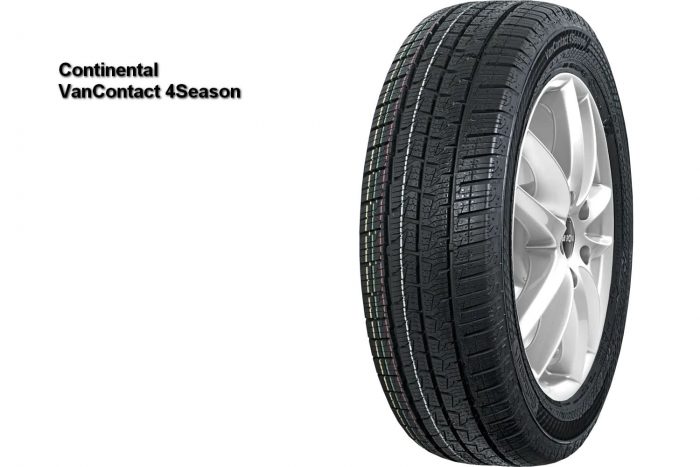 So, let’s summarize the results of the test from Promobil. Because of the long braking distance on wet roads, Vredestein practically devalued all its achievements in other disciplines and took the last place by the sum of all tests. By the way, the developers of Vredestein admitted this weakness of their model and they have already corrected it – there is already a much-improved version of this model – Vredestein Comtrac 2 All Season+ in stores.

And who won? According to the Promobil standard, the importance of winter, “wet”, “dry” and environmental performance of all-season tires is 20/40/20/20 percent respectively, which means that the “winter sports” and consciously oriented to work in wet conditions Continental VanContact 4Season is the winner of the test, ahead of the winners – Goodyear wet track specialist and Michelin dry track test winner.

As you can see, choosing the best in this category was not easy. So which model is better to choose, you may ask. It’s simple, but individual. If you drive your camper primarily on roads in the foothills and mid-mountains, where the focus is on the optimal balance of all-around performance with an emphasis on wet performance, the best choice would be all-season tires from Conti, Goodyear, and Michelin. And if you hardly ever drive on snow, and want to install all-season tires only because of the legal requirements for mandatory winter labeling, you will find a faithful and reliable companion in the form of Pirelli Carrier All Season.

But those who expect the highest level of safety in both seasons and maximum traction in all weather conditions, especially in winter, still cannot do without changing tires in autumn and spring.